– ‘Remembering Heroes’ is the Second Book in the Discovering Heroes™ Series, Which Increases Awareness About 9/11/01 and Everyday Heroes

– Book Pays Tribute to the Fallen, Including Heroes from FDNY’s Rescue Company 1

END_OF_DOCUMENT_TOKEN_TO_BE_REPLACED

WCBS Newsradio 880: With a Gentle Approach for a Tender Audience, Author Aims To Teach Kids About 9/11

Reporter Sean Adams from WCBS Newsradio 880 interviewed CEO Kristie Kiernan Bouryal and her parents, who inspired her, about her Discovering Heroes™ book series. Read the story and listen to the interview now.

The International Association of Fire Fighters (IAFF) wrote a story for its members and affiliates about “My Buddy’s a Hero – And I Didn’t Even Know It” and Author Kristie Kiernan Bouryal.

– Grandfather, Former Lieutenant in the FDNY’s Elite Rescue Units Shares 9/11 Experience with Grandkids in First Book of the Series

Seventeen years after the worst terrorist attacks on American soil, Context Productions, a creator and publisher of children’s content, is releasing the first book in its Discovering Heroes™ series of early chapter books for young readers. “My Buddy’s a Hero – And I Didn’t Even Know It” shares a first-person account of 9/11 heroism and helps kids expose everyday heroes in their own lives.

END_OF_DOCUMENT_TOKEN_TO_BE_REPLACED

Hard, Soft Covers and Digital Edition for ‘My Buddy’s a Hero – And I Didn’t Even Know It’ Available Now 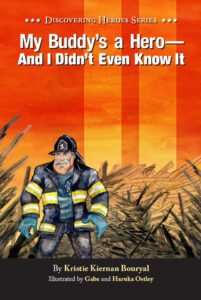 In this first book of the Discovering Heroes™ series, the main characters, Tyler, Olivia and Sophia, learn that their Grandfather helped rescue the last man out alive from the ruins of the World Trade Center tragedy.

It’s the first time the three ever heard that Grandpa was a part of the September 11, 2001 rescue and recovery efforts. His story only unfolded because the main characters asked questions, were active listeners and sought deeper meaning. In this inaugural edition, kids learn what it was really like on America’s darkest day and open their minds to a world full of stories about everyday heroes just waiting to be told.